In the world of globalization, one vision is to excel in their career and we believe in fulfilling the dreams into reality by offering the desired learning to the students. Clearing a competitive exam will no more a nightmare for you as our sole mission is to ensure victory for our applicants. The vision of Innovative Future Academy is to provide a most excellent learning program that focuses on each and every course and provides the learner with exemplified supervision and mentoring feedback on a regular basis.

Innovative Future Academy will associate the talent and dedication of the most excellent faculty in India with the newest technology to provide the top possible learning environment to students for competitive exams. Our expertise lies in learning programs for competitive exams as well as growing skill development. Amidst ruthless competition, Innovative Future Academy takes huge pride in being the best NDA Coaching Institute in Chandigarh. With years of knowledge in the same field, the Institute has developed a sense of proficiency in this exam. Innovative Future. 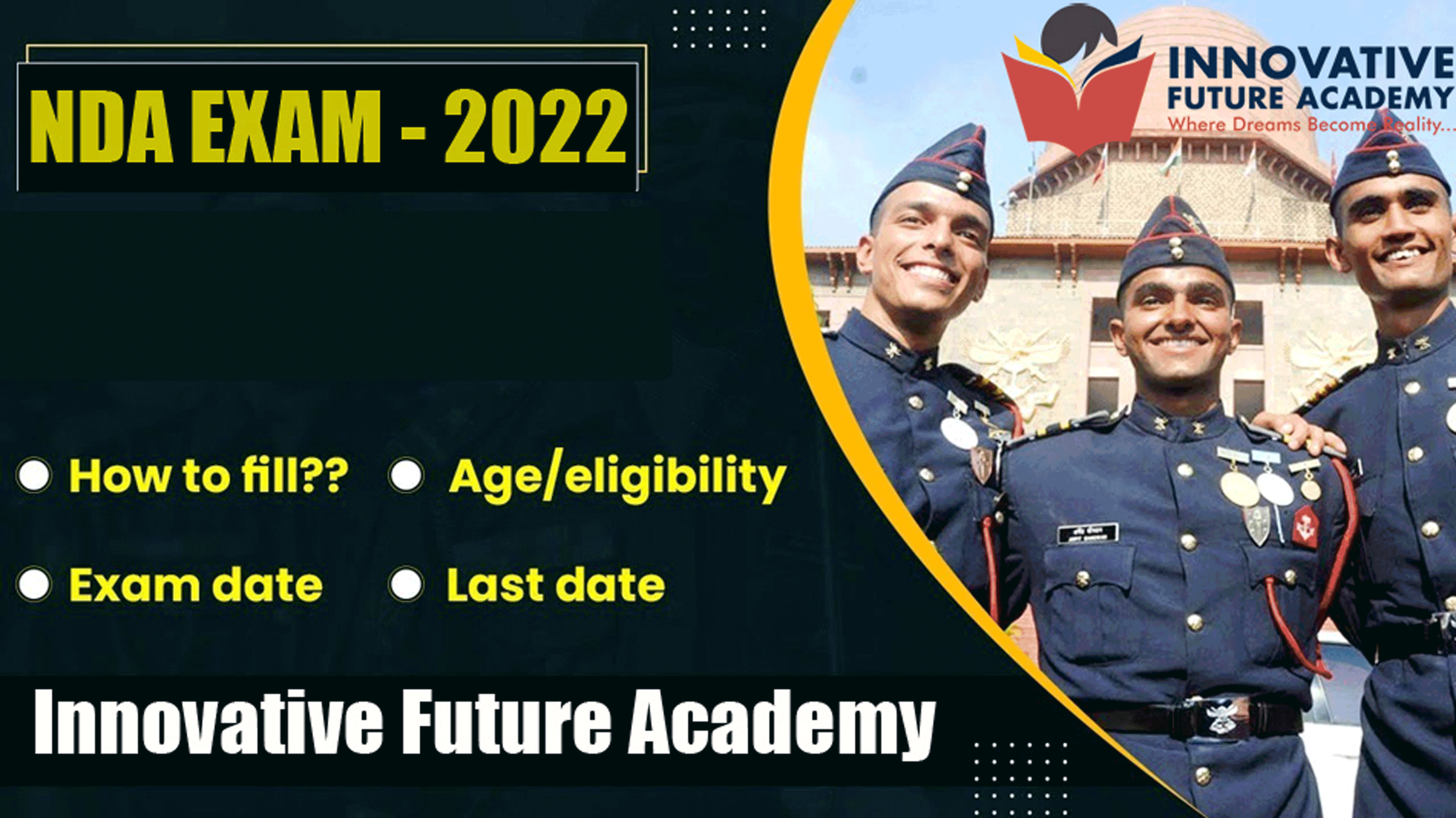 Innovative Future Academy is one of the outstanding NDA Coaching Institute in Chandigarh region. National Defense Academy is a national-level exam organized by UPSC to recruit candidates in the Indian Army. NDA exam makes a candidate eligible to serve the motherland and become part of the Indian Army. NDA Coaching in Chandigarh is the best career option after the 12th. After clearing the NDA exam a student will secure his future and serve his motherland. NDA Exam will help them to enhance their knowledge and to get a highly dignified and respectful job.

What is National Defence Academy?

UPSC conducts The NDA(National Defence Academy) exam for entrance to the military, Navy, and Air Force wings of the NDA. This exam may be an entryway for candidates looking forward to joining Defence Forces including Army, Navy, and Air Force. This is often a national-level test that occurs twice a year. NDA I and NDA II Exam are there to help candidates to make a career in Defence services.

Applicants are first required to take the National Defence Academy & Academy (NDA & NA) Examination. After this exam, the applicant then becomes suitable for the test or interview performed by the Service Selection Board (SSB). The UPSC is exclusively liable for issuing guidelines for selection and consequently the final conduct of the doorway examination.

General Ability Test has 6 Sections with the break-up of 400 marks as below:

How to Apply for NDA Written Exam?

The written examination conducted by UPSC will consist of objective questions based on math and general ability. After clearing the test one has to go through a five-day interview procedure with the State Selection Board for evaluation of the potential of officers(Intelligence and Personality Test). Besides, the interview, one has to go through the intelligence Tests both verbal and non-verbal, intended to assess basic intelligence. After the test, one has to undergo a medical test.

After training the applicant can choose either a technical or a non-technical field of specialization, as per his preference. Growth opportunities both in terms of knowledge plus finances are limitless. Even during the service and after retirement, individuals get to relish special facilities and tax exemptions.

This job has a lot of advantages during the service as well after retirement. Facilities such as medical and insurance are offered to the applicant. So if you have an eager desire to serve your country, then this field is for you.

Interested applicants can fill NDA application form online by visiting NDA’s Official Website.  The application fee is Rs 100. Candidates can pay them both online and offline. The Commission releases the list of rejected candidates, a few days after the closure of the application procedure.

NDA result is declared online in two stages – written and final. First, the result of the written test is declared followed by the announcement of the final outcome. The result is made available in PDF format. Then it displays the roll numbers of qualified candidates. The mark sheet of candidates is released after the declaration of the final outcome. Then the candidates need to secure NDA cut-off 2022 separately in written test and SSB Interview.

The SSB Interview is conducted for Intelligence plus Personality Test. The examination is conducted in two stages. After this, all qualified candidates are put to stage 1 test on the first day of reporting at Selection Centers/Air Force Selection Boards/Naval Selection Boards. Furthermore, candidates qualifying for the first phase are called for the second stage test. Those who will qualify for the second stage are necessary to submit certain documents.

Candidates are ultimately selected for admission to Army, Navy, and Air Force wings of NDA/NA based on their performance in written exams and SSB interviews. Moreover, the final allocation will be done as per the number of vacancies subject to the applicant’s eligibility, medical fitness, and merit-cum-preference.

To crack exams there are diverse ways like good coaching institutes like Innovative Future Academy which helps students to know the tricks of time management with elevated quality and knowledgeable faculties and good study material.

How to Prepare for the NDA Written Exam?

To crack exams there are dissimilar ways like good coaching institutes like Innovative Future Academy which helps learners to know the tricks of time management with elevated quality and experienced faculties and high-quality study material.

Some Helpful Tips for NDA I – 2022 Exam Preparation

Here are some Helpful NDA I Exam Preparation Tips to score better in the exam:

In addition to the interview, the applicants will be put on Intelligence Tests both verbal and non-verbal, designed to assess their essential intelligence. They will also be put to Group Tests such as group discussions, group planning, and outdoor group tasks, and asked to give brief lectures on specified subjects.

All these tests are intended to judge the mental caliber of a candidate.

Why Join us at Innovative Future Academy?

Innovative Future Academy is one of the most exceptional institutes of NDA Coaching in Chandigarh. We at IFA offer these facilities:

NDA Coaching in Chandigarh From the best Institute

Innovative Future Academy offers candidates the best coaching for NDA written exams in Chandigarh. Our staff is aware of the aim and objective of our students who want to join the NDA. Being in this field of offering coaching to candidates for NDA for the last couple of years, we have the best training instructors and several selections in the Indian Armed Forces of the NDA. This has made us one of the Top NDA Coaching institutes in Chandigarh.

Which coaching is best for NDA Coaching in Chandigarh?

Which city is famous for NDA coaching preparation?

Chandigarh-based IFA Defence Academy is the best defence coaching institute for a holistic preparation of NDA Written as well as SSB interviews. It is one of the most renowned coaching institutes for complete NDA preparation under the guidance of experienced faculty members and ex-officers of the defence forces.

Which is the best time to join NDA coaching in Chandigarh?

The candidates should set their goals and start their preparation as early as possible. Candidates should start preparing from class 11th onwards. NDA Foundation programs are specially designed for 11th and 12th studying students which cover the entire academic syllabus simultaneously with the NDA syllabus.

Serving the country courageously and fearlessly demands guts. The NDA is a sector that is the most respected and hot. However, to join the Armed Forces, you need to get through the NDA written test. After that, when you clear the exam, they can join either the Army, Navy, or Air Force.

The number of NDA candidates is increasing surprisingly. This thing is making it tough to get through the NDA exam. Additionally, despite such hard competition Innovative Future Academy with its expertise provides the best study materials and methods to help them ace the exams. Because of this thing we are one of the Best NDA Coaching Institute in Chandigarh.

Applicants must be scoring the lowest score of 25 percent in both papers. Altogether the cutoff can vary between 35-40 percent. At Innovative Future Academy, we present an analysis regarding this, which has supported us to become the Top NDA Coaching Center in Chandigarh, India.

Things to consider while training for the NDA Exam Syllabus

(I) Paper 1 (Mathematics): Paper one has 120 questions that are divided equally and have equal marks. Note that a negative try gives about -1/3 marks.

The contest for NDA is surprisingly more than 4 lakhs students appear for the NDA examination but only 10000 clear out which only a selected 500 finally get in. This is the lower and the most drop-down percentage, and are you ready to risk your whole career for this, without looking for specialization.

Innovative Future Academy is a top Institute that has been providing the best NDA coaching in Chandigarh. IFA is having 1000+ selections and is continuously adding to the number of passed applicants. The faculty is teaching for defence classes only, and not like the other academies providing all courses under one roof. Our teachers are permanent. Each of them has years of experience.

Our faculty includes the former Head of Department of various Universities. The Coaching will make sure each student gets success. IFA has a tradition of producing 3rd generation officers. Simply we have produced more than 10% of the final merit list from us. Join IFA – the Best NDA Coaching Academy In India and see the difference.

Why Choose IFA for NDA Exam Coaching in Chandigarh?

We have been providing NDA written exam coaching for over 5 years. Besides that, we have staff with more than decades of teaching experience. Please be aware of such institutes.

What Will I Learn?