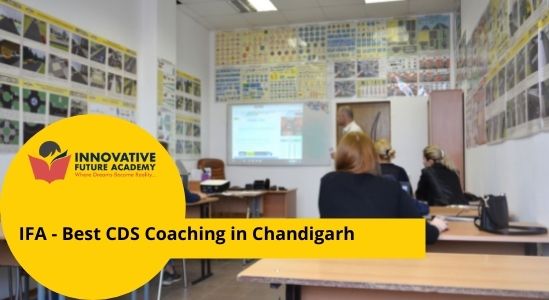 IFA Institute is an institute that has become a favorite learning hub for the best CDS coaching in Chandigarh. IFA institute in Chandigarh is growing the best classroom coaching for CDS with outstanding outcomes for the years together. The CDS exam is only for those candidates who want to serve the Indian Army, Navy, and Airforce selflessly. IFA Chandigarh has all the attributes to cater to the basic needs of the aspirants of the CDS exam. If you are looking for the best CDS Coaching Institute in Chandigarh then IFA is the ultimate yardstick to meet all the educational needs to assist you to qualify for the CDS exam. We have capable Members that are well educated and highly experienced which has made us successfully extend the CDS Coaching in Chandigarh.

IFA is the central platform that is known for offering the best CDS Coaching in Chandigarh. Our skillful teaching force to quality study material you will get every possible benefit after joining the IFA institute. The structure of the CDS classes in Chandigarh is designed in such a way that it usually helps students to achieve encouraging results in a limited amount of time. Multifarious, hardworking, and devoted are a few words that clearly define the teaching force present in the IFA institute. Well, if you have also set your target on cleaning the CDS exam then look no further and link with the IFA- the best CDS Coaching in Chandigarh.

Here are a few reasons why you should choose us? Highest Selection Rate

For some years, IFA has been uplifting selection rates regarding the CDS examination. That is why we proudly say that we have been experiencing promising results from the past few years.

IFA is an ISO Certified institute working progressively to match the latest education standards. So that you can get the best CDS Coaching in Chandigarh from IFA.

IFA concentrates on a result-oriented approach to enlighten the future of the budding youth and guide them to crack CDS exams.

IFA arranges doubt clearing sessions for the students to grasp a better understanding of every topic. You can clear all your doubts regarding the CDS examination with the soulful help of the IFA institute.

In fact, our academy also organized guest lectures for students that is helpful. IFA to organize monthly guest lecturers to inspire and inform students about cracking CDS exams with quality guidance.

IFA provides daily assignments after the classroom lectures to discuss the topic at length with the students to extend through learning.

IFA updates the batch-wise weekly timetable on the official website and shares the same with the students in advance to assist them to attend the classes of the CDS exam on time.

The main purpose of the CDS exam is only for those candidates who want to serve the Indian army. In the future, if you want to crack this exam then we can also guide you through well-trained teachers and sufficient study material. We at Innovative Future Academy have the best CDS Coaching in Chandigarh.