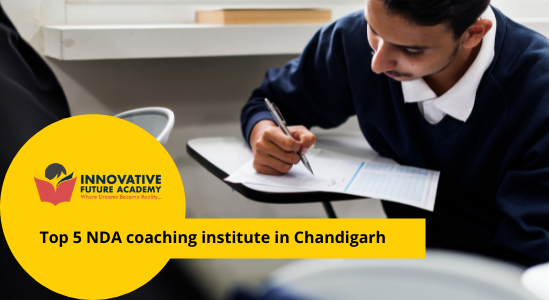 So, before start talking about the top 5 nda coaching institute in Chandigarh, let’s talk about NDA.

National Defence Academy (NDA) entrance exam is conducted by UPSC. This exam includes the Indian Army, Indian Navy, and Indian Air force. This exam is held twice a year in April and August. It is a national-level examination and the most prestigious competitive exam in the country. Mental fitness, as well as physical fitness, is important for this exam.

Eligibility criteria for this exam:

The first thing is that the age should be in between 16.5 years to 19.5 years. The candidate must be unmarried even after selection till your training. And most importantly, this entrance exam is only for gents. For appearing in this exam, the candidate must be 12th passed or pursuing it. For the Air force and Naval Wing, the candidate must have Mathematics and Physics as subjects in 12th standard. But there are no such requirements for the Army wing. Just you have to pass the 12th standard in any stream.

How to apply for NDA?

You can apply online. The application form is available at www.upsconline.nac.in.

The selection process should be in two stages:

So, now coming to the main point, the top 5 NDA coaching institutes in Chandigarh are:

If you can crack the NDA entrance exam, then do visit the Innovative future academy of Chandigarh. It is one of the top 5 nda coaching institute in chandigarh. It provides the best quality of education to its students and prepares them for the entrance exam. The faculty is also very good. To know more visit www.innovativefutureacademy.com

It is one of the top 5 NDA coaching institutes of Chandigarh which is trying its level best to prepare candidates for the NDA entrance exam for the last 6 decades. One of the most important features of this institute is its mock test, where many similar papers are conducted. Moreover, it provides materials for the students.

Also Read: Why NDA Is Best Option After 12th Class?

NCA Chandigarh is one of the top 5 NDA coaching institutes in Chandigarh.  They provide quality materials for the students, at a very low cost.  This institute knows every aspect of SSB, and hence they can guarantee their students about their seats.

It is one of the top 5 NDA coaching institutes in Chandigarh, which provides learning competitive environments among the students. They provide the best quality education along with proper planning about how to prepare the students for the exam. This is the best institution in which you can bag in.

It is also one of the top 5 NDA coaching institutes in Chandigarh. They have a reputation for completing the full syllabus as quickly as possible, which provides the students a huge amount of time to prepare for the exam well.

This information will help you a lot if you are an NDA aspirant and at last wishing you all the best for your upcoming future.