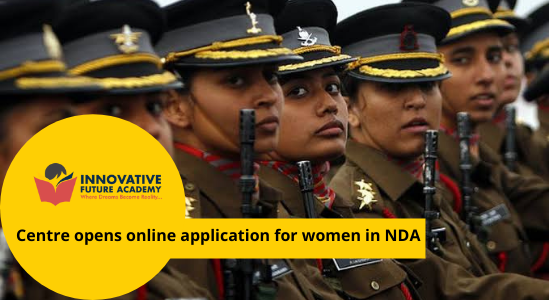 NDA exam for Girls: The news came after the Supreme Court on Wednesday stressed that it “cannot belie the aspirations of young girls” as it rejected the Centre’s request to delay the first-ever examination for women candidates for their entrance into the NDA.

The Union Public Service Commission (UPSC) declared on Friday that it has been opened an application window for female candidates to apply for the National Defence Academy and Naval Academy Examination, 2021. “In compliance with the Hon’ble Supreme Court of India’s interim direction allowing the women candidates to take part in the National Defence Academy and Naval Academy Examination (II), 2021 by its order dated 18/08/2021 in WP (C). No.1416/2020 filed by Kush KalraVs. UoI& Others, the Union Public Service Commission has decided to start the online portal of application on its website (upsconline.nic.in) for this Examination. They decided to let the unmarried women candidates ONLY by issuing a corrigendum to the Notice No. 10/2021-NDA-II, which was published on 09/06/2021.

A writ petition was filed by Kush Kalra in the Supreme Court for permitting NDA For women in 2021. The petition asks objections against the issue of violation of Articles 14, 15, 16, and 19 of the Constitution of India by not allowing the aspired female candidates in the NDA Exam. In response to the same, Justices Sanjay Kishan Kaul and Hrishikesh Roy passed an interim order granting the NDA for Female Candidates 2021. It is big news for all the female applicants aspiring for a job in the defence forces to serve the country. It is now exacted that the UPSC will soon release an update regarding the same on its official website. The aspiring female candidates for NDA Exam are recommended to subscribe to our newsletters for recent updates on NDA.

All the candidates need to satisfy the criteria with regard to nationality to be eligible for application. To be eligible, a candidate must be either one of the following:

Also Read: Career in Defense after 10+2 and Graduation

” If a candidate, of any gender other than female, applies then the candidate will be liable to penal action in terms of Rule 7 of the Rules for this Examination including debarment for 10 years from appearing at all future Examinations/Recruitments of the UPSC “.

Applicants should remark that there will be a ceiling on the number of candidates allotted to each of the Centres. Allotment of Centres will be on the ‘first-apply-first allot’ basis, and once the capacity of a particular Centre is achieved, the same will be frozen. Applicants are, thus, recommended that they may apply early so that they could get a Centre of their choice. This is all you need to know about the NDA exam for Girls.